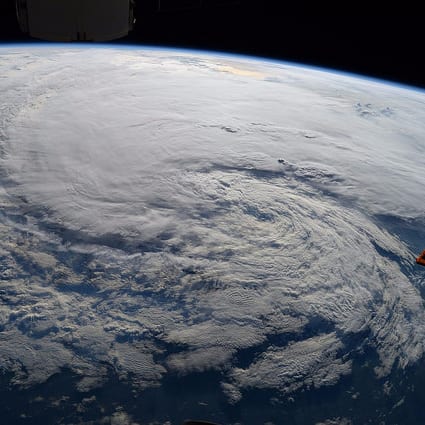 With a second huge hurricane hitting America in under a month, climate change is on everyone’s lips. Trump has famously denounced climate change as a “hoax”, however, the unprecedented nature of these natural disasters is hard to go unnoticed. Were Hurricane Harvey and Hurricane Irma man-made?

Hurricane season happens at this time of year when the Atlantic Ocean is at its warmest, right after a summer of hot weather. Warm, moist air rises from the surface of the ocean, and as it does, it condenses and leaves an area of low air pressure below that is quickly filled by more air. This shifting of air causes high-speed winds that spiral fast, creating a low pressure center—otherwise known as the ‘eye’ of a hurricane. The faster the winds blow, the lower the air pressure is in the center, causing the storm to feed itself and become stronger. A tropical storm has winds that reach at least 39mph, and it is upgraded to hurricane status when the winds reach 74mph and above.

Hurricane Harvey developed near the Caribbean, while Hurricane Irma developed near the Cape Verde Islands in the central Atlantic Ocean. Both have been record-breaking storms. Hurricane Harvey was defined as the most major hurricane to make landfall in the US in 12 years. It was compared to Hurricane Katrina; thankfully not in casualties, but rather in economic costs. Experts have named it the most costly natural disaster in US history as it caused an unprecedented rainfall in Texas.

Hurricane Irma was hot on the heels of Harvey, and has been defined as the eastern-most Atlantic hurricane of this strength on record, second most powerful of its kind when it comes to sustained wind speeds, and longest Category 5 hurricane since records began. These incredible statistics have not gone unnoticed, with many claiming that climate change is at fault.

Climate change is said to cause ocean water to become warmer and to cause sea levels to rise. As hurricanes are created by warm, moist air, it’s clear to see why people make the link—warmer, moist air means a more fertile environment for a storm to begin.

This is the first time the US has been hit by two Category 4 storms in the same year. As climate change causes rising sea levels as the ice caps melt, coastal flooding was not only more likely to happen, but also exacerbated.

“Unfortunately, the physicality is very clear: Hurricanes get their destructive energy from the warmth of the ocean, and the region’s water temperatures are super elevated,” said Anders Levermann, a climate scientist at the Potsdam Institute for Climate Impact Research.

He added: “Burning coal, oil and gas warms our planet and that way supplies energy for the build-up of ever more powerful tropical storms.”

Climate change deniers have their arguments too. Hurricanes occur naturally—it’s in their nature. Just because climate change may contribute to natural disasters, it may not mean that these things wouldn’t have happened without it. There have been many disastrous hurricanes in the past. The famous Labour Day hurricane that had wind speeds equal to Irma occurred in 1935. A hurricane in Cuba is the longest Category 5 on record, lasting 78 hours, and it happened back in 1932.

Nevertheless the level of damage can be considered to be so much worse for the simple fact that the areas that were hit are much more built-up than they have been previously. Man-made factors undeniably contribute to the severity of a storm.

The fact of the matter is, while you can’t directly attribute these natural disasters to climate change, it did make them more likely to occur. It seems that the majority of popular media agrees that climate change is at fault, even though it’s still a touchy subject with politicians under the Trump administration. Even the Pope has criticised climate change deniers, a category into which the president himself falls.