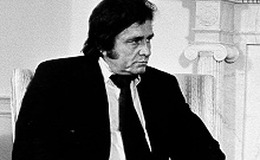 With All-Star weekend come and gone, people have to replace the basketball awesomeness with something. While these releases may not be as exciting as dunking over a car, it still gets the job done. Here’s what’s new this week.

First we start with something from the archives of the late, great, Johnny Cash. This album gives us two discs of low-fidelity, twangy goodness from the Man In Black. For those of you looking for more, Sony Legacy has released “Bootleg, Volume 2” of Cash’s recordings from the 1950s and 1960s. Volume 2 continues showcasing his earliest performances, mostly unreleased or under-promoted. Definitely recommended for Cash fans new and old.

But probably the most interesting from the bootlegs is Johnny’s “personal file”. Hidden in his home in Tennesse, Cash stored in a small vault, firearms from the eighteenth century, letters from fans around the world, demos and his “personal file,” recordings he did at his studio just for the hell of it. This is a refreshing take of Cash: cool, relaxed without the pressure of pleasing an audience. Just him, his guitar, his thoughts and his soul. Though released in 2006, it was renamed the first volume of the Bootleg series. Check out “The Letter Edged in Black.”

Last year, awesomeness was bestowed upon us when Gil Scott – Heron released “I’m New Here” in 2010 after sixteen of inactivity. The moment he let loose his graveled, pained voice, we were reminded why he influenced an entire generation of hip-hoppers. Now, upcoming producer Jamie xx is giving the already classic album a new twist. As evident on “NY Is Killing Me,” Jamie doesn’t twist Heron’s voice too much, since it’s already perfect. Rather, this is a meditation on Heron’s album rather a slapped – together remix album that only serves to give Jamie some shine.