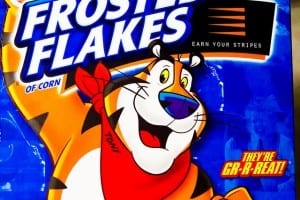 Hearing the deep-toned animated voice on your television screen say “They’re Gr-r-eat” will either elicit a feeling of warm childhood feelings or a craving for a deliciously sweet cereal, commonly known as Frosted Flakes. The voice of ‘Tony the Tiger’ has penetrated the childhood of many people and now Tony Marshall, the voice behind the beloved mascot, has died at the age of 64.

Thurl Ravenscroft, was the first voice behind the character, when he started in 1952. However, Lee Marshall, first lent his voice to be the mascot in 1999, and completely took over as the lovable tiger in 2005 after Ravenscroft passed away at the age of 91. Lee Marshall’s distinguished and personable voice was always geared toward success.

Marshall actually began his career in radio at the impressive age at 14 when he got a job at a Phoenix radio station. After working there for a few years, he ultimately ended up working at the city’s rock station. He ended up living in a couple other cities like Los Angeles and Detroit, where he ended up doing even more radio that ranged from talking about sports to talking about the news.

He even did some voice work on famous cartoons, such as playing some of the villains in Scooby Doo. Marshall also became a ringside interviewer and announcer at high profile wrestling matches. Marshall’s voice was as comforting as it was convincing.

The former manager of the Los Angeles Dodgers once said “If God ever wanted to make a speech, Lee Marshall would get the call. “

His son Jason Marshall revealed that, his father had died on April 26 at a Santa Monica hospital after he lost his battle with esophageal cancer.

[easy-social-share buttons="facebook,twitter,google,linkedin,stumbleupon,pinterest" counters=0 hide_names="force" fixedwidth="yes" fixedwidth_px="111"]
Previous ArticleWillow Smith is rushing too fast to be in her 20'sNext ArticleHow Textbook Costs Have Ripple Effects on Other Academic Decisions for Students