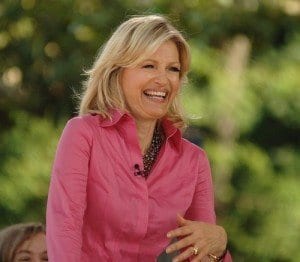 Diane Sawyer made almost as much commotion about her performance on Election Night as President Obama did winning the election. The legendary TV anchor appeared to be, dare I say, happily intoxicated during live coverage of the 2012 election. Word of her ways spread rapidly through the Twitter world. Sawyer acknowledged the tweets Wednesday morning with nonchalance and humor.

“Awe for the @ powerhouse team. Hail the techs who kept us on air…during the 25 minute power outage,” Diane Sawyer tweeted. And then, “Read your tweets the good, the bad and the funny. See you on @ABCWorldNews.”

Some of “the good, the bad and the funny” include “Watching the Drunk Diane Sawyer show on . Where is she hiding her flask?!? #Election2012” from @higgypiggy38 and “The delightful @RandyRainbow gets drunk dialed by Diane Sawyer…” from Twitter handle @AlecMapa with a video to go along with it.

The 66-year-old TV anchor was seen slurring her words, rambling and pronouncing the president’s name as “Barack Orama-Obama” as she kept the News audience updated on election news. A senior network source at the studio said she was simply suffering from exhaustion. Well, that’s not as fun.

Apparently she’s rested up and ready to get back to work, announcing that she’s headed off to D.C. to interview Republican speaker John Boehner.