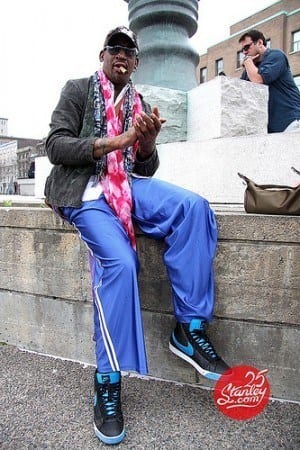 Dennis Rodman, commonly referred to as “The Worm,” has actually met the suckling piglet of a threatening dictator Kim Jong Un in a whirlwind 2-day vacation to North Korea.  In a fit of eccentricity that would make his dear late father proud, Kim Jong Un partied with Dennis Rodman, retired NBA player, three other Harlem globetrotters, and a crew of Vice news reporters for two days, becoming the first Americans to ever personally meet the tyrant.  Dennis Rodman left the country with words of praise for Kim, smilingly reporting “I love the guy.  He’s awesome. He’s so honest.”  His human rights records do indicate that Dennis Rodman is right, Kim is brutally honest when it comes to his personal opinions and actions.

Despite the fact that 3.5 million North Koreans have starved to death in Kim’s country since 1995, there was more than enough libation and entertainment to go around to Dennis Rodman and crew.  The weekend was spent ice skating, watching basketball, watching North Koreans hula-hoop, and getting wasted.

The U.S. State Department, in the meantime, is none too pleased with Dennis Rodman and his amazingly naïve review of whom they presently consider to be one of the biggest threats to homeland security.  The extent of Dennis Rodman diplomacy that went down over the weekend was a message that he passed along from Kim to President Obama, where the Korean chubster expressed a single desire: “he wants Obama to do one thing, call him.”

That’s pretty much where the political dialogue between Kim and Dennis Rodman ended, giving evidence of the hyperbolic application of the phrase “basketball diplomacy” that has been attributed to this pretty much stunt news trip produced by Vice.  Vice itself has disclaimed that politics and foreign relations was never a priority in sending Dennis Rodman and co. to the geographic Fort Knox.  Michael Lombardo, executive producer for the HBO/Vice engineered expose explained, “This was always intended to be, ‘You know what, let’s get our camera into an isolated country that we hear about, we read about and yet is hard for us to even picture.’ ”

At this point, it’s unclear who is benefiting more from the positive propaganda of the trip: Dennis Rodman or Kim Jong Un.

Previous ArticleCasimir Pulaski Day, aka world’s most indie holiday, in food, freedom and funNext ArticleForecastle Festival is one of those third party candidates throughout festival season