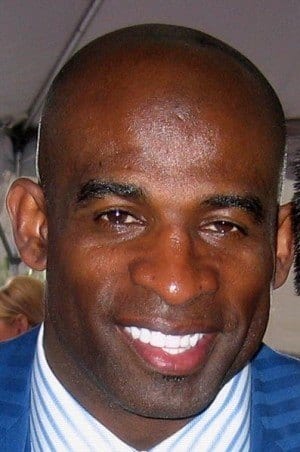 Deion Sanders, former Dallas Cowboys star, was cited for misdemeanor simple assault on Tuesday after an altercation with his estranged wife, Pilar.

Pilar was arrested on Monday for misdemeanor family violence. Further investigation of the domestic violence claims led to a charge also being field against Deion Sanders, said police in Prosper, TX where the couple lives.

The charge of misdemeanor simple assault, which did not result in an arrest for Deion Sanders, covers any act considered aggressive and carries a fine of up to $500, Prosper police spokesman Celso Martinez told Associated Press. He declined to say what the specific allegations against Deion Sanders were.

On Monday, Deion Sanders tweeted “Pray for me and my kids now! They just witnessed their mother and a friend jump me in my room. She’s going to jail n I’m pressing charges!” He also posted a picture of himself and his sons filling out police reports. The photos were later removed from the site and replaced with a post about joy the next day. “Joy came this morning and we opened the door and let Joy in.”

Pilar was charged with misdemeanor assault and held overnight in the Collin County Jail with bond set at $264. She was released Tuesday with orders to stay away from her home for 60 days and was barred from threatening or harassing her husband.

“I understand that I have very little chance at beating a Hall of Fame, two-sport man that everyone seems to love and adore,” Pilar said to reporters outside the jail after her release. “I’m a full-time mom, 100 percent for my children. And I just haven’t been given a fair shake.”

Deion Sanders filed for divorce from Pilar in December after 13 years of marriage. They have continued to live together in their home in the Dallas suburb of Prosper with their three children. Deion Sander’s attorney Rick Robertson said the couple has been living in separate areas of the 10-bedroom, 29,000-square-foot home.

The couple’s tumultuous relationship has been widely publicized. Pilar has accused Deion Sanders of cheating on her with entertainment producer Tracey Edmonds.

Pilar has filed a $200 million defamation lawsuit against her husband and his daughter from a previous marriage, Deiondra, for calling her a “gold diggin’ h*e” on Twitter. She is also suing Deion Sanders’ aunt, Laura Jones, alleging the aunt assaulted her in their home while Sanders watched.