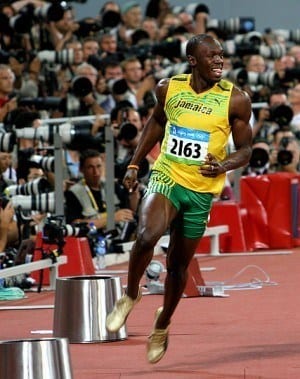 Four years ago, Usain Bolt awed the world as he beat the world record sprinting the 100 meter dash in 9.58 seconds, making him the fastest man alive. He was going against the fastest men in the world, and blew past them, winning the gold by a long shot, and beginning to slow down to celebrate before he even crossed the finish line. In this year’s 2012 London Olympics, Usain Bolt was striving to beat his own record and hold his title as the fastest man alive. The lightening Bolt achieved his goal as he beat Jamaica’s Yohan Blake (silver) and America’s Justin Gatlin (bronze) by 0.12 seconds.

Usain Bolt wanted to be known around the world as a legend, and leave people turning off the television saying, “wow.” Well, legend he is, and the 6-foot-5 lightening Bolt awed everyone around the world as he raced to victory in the men’s 100-meter final Sunday night. His opponents came to the race knowing how fast he was, but believed that he was vulnerable and starting to decline as he said that he was just 95 percent fit and Yohan Blake beat him in the Jamaican nationals.

However, seven other men were left in the dust to watch as Usain Bolt bolted past them and, once again, stole their dreams of a gold medal away from them.

Both Blake and Gatlin ran their fasted race last night; however, no matter how fast they ran, Usain Bolt was ahead of them. As Bolt is too big for the starting blocks, the champ started off the race with a slow start as he stumbled off the blocks a bit before he kicked it into gear.

Usain Bolt explained his philosophy as “stop worrying about the start, the best part of the race in the end.”