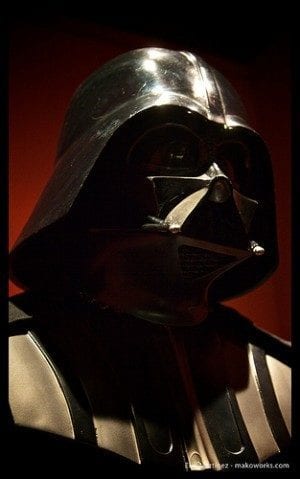 An Englishman was arrested after punching the wife of Darth Vader. No, unfortunately it’s not the Darth Vader you’re thinking of. Mark Nokes officially changed his name to Darth Vader several years ago. A decision I’m sure he has to regret.

Ikbal Hare, 35, was arrested on September 20 for the assault. Hare came after Vader for allegedly having an affair with his wife. However, Hare missed and instead hit Vader’s wife right in the face. He’s just lucky Vader wasn’t carrying his light saber at the time. Hare ran off, but the force was not with him and he was captured and arrested two days later. It was reported that Mrs. Darth Vader attempted to stop the scuffle by getting in the middle of the two men. But in the process, her face suffered a blow.

Ikbal Hare pleaded guilty to possessing a bladed article, assaulting Vader’s wife, having a horrible name and disorderly behavior. He is now facing 18 months on probation, anger management and 200 hours of community service. If you punch Darth Vader’s wife, you better be prepared to face the consequences.