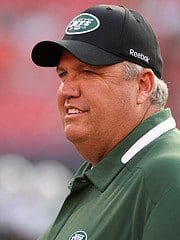 Darrelle Revis, considered by many to be the best defensive player in the NFL, is reportedly being included in trade talks by New York Jets management. But the Jets’ coach, Rex Ryan, doesn’t want the star cornerback to leave the team.

New York Jets owner Woody Johnson has said he has “no confidence” in the team’s chances of resigning Darrelle Revis after his contract expires after the 2013 season. So instead of letting the star player go for nothing, he wishes to get a few players back in exchange, according to CBS.

That could prove difficult, as Darrelle Revis was sidelined this season as a result of a serious ACL tear. The recovery time for such injuries is long and full recovery is uncertain, so many teams might not want to take the risk of trading for Revis.

Coach Rex Ryan, however, is opposed to trading away Darrelle Revis, whom he has called the best defensive player in the NFL. Ryan’s motivations are clear: without Revis, the Jets would likely suffer defensively and that may cost Ryan his job. Besides, who wants to lose their best player for nothing?

Well, not exactly nothing. The release of Darrelle Revis would take a lot of salary off the books, as Revis makes $6 million dollars in 2013 but could ask for $16 million in 2014 upon signing a new contract. The Jets are already in a financial hole, as they are already nearly $20 million over the 2013 salary cap. Taking Revis’ salary out of the equation could clear up cap space now and in the future.

Typically, teams have the option of “tagging” a player with the “franchise tag” when they can’t come to an agreement on a contract. The “tag” mechanism allows a team to sign a player to a 1-year deal for a reasonable amount of money. But Darrelle Revis’ contract expressly forbids the franchise tag from being applied to him.

Revis has no qualms about playing for the Jets, who have been mediocre for several seasons.

“I definitely want to be here,” Revis said recently. “This is where I live, this is the team I got drafted by.”

All the Jets have to do is show Darrelle Revis the money.