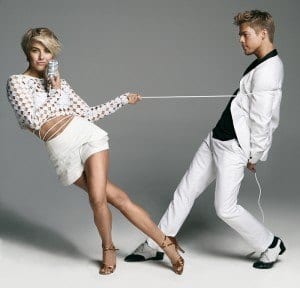 Dancing With The Stars champion siblings, Derek and Julianne Hough made a recent announcement on Good Morning America that’s adding excitement to their already thrilling 2015 run.

The pair who have spent a decade working together on Dancing With The Stars announced on March 2 on Good Morning America that they will be kicking off their new tour, the Move Live on Tour. The tour is the follow up to their first tour last year which led them through 40 cities, with even more cities added this year.

The Hough siblings are currently taking part in season 20 of the reality dance show where Julianne is serving as a judge this season while brother Derek will be competing with Nastia Liukin.

The tour will kick off on June 12 in Phoenix following the conclusion of DWTS season 20 as well as Derek’s theatrical feature in the New York Spring Spectacular with the Rockettes.

The Move Live on Tour is a follow up to the siblings first tour back in 2014 and will visit bigger venues, feature all new choreography and bigger and better production features.

For Derek and Julianne, the tour is just as much about fan interaction as it is about performing and entertaining. The pair partakes in meet and greets before the show and often incorporate fan involvement by inviting fans to join them and dance on stage.

“We want everybody to be up on their feet, moving in their seat, having a good time and to leave feeling inspired,” Julianne told MLive.com.