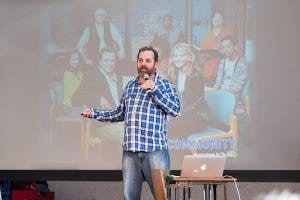 Today is the second first day of work for Dan Harmon on NBC’s Community. If you don’t watch Community, (or don’t have annoying friends like me who tell you how amazing the show is) then you might not be aware of the creative shakeup that happened on NBC’s cult show this past year. Here are the basics:

Until recently, Dan Harmon had not watched the fourth season of Community, but decided to bite the bullet and see what had happened to his cast of characters in the 2013 season.

Yesterday on his podcast “Harmontown,” Dan Harmon revealed his opinions of Community’s fourth season. And man oh man did he have some opinions.

Fans of Community will no doubt be familiar with Harmon’s deep affection for the characters he created and the painstaking process he goes through when writing their stories. So it should come as no surprise that he takes changes to his creation very much to heart.

Dan Harmon realized that NBC hired new showrunners David Guarascio and Moses Port to make Community “an impression, (of Harmon) and an unflattering one.” He labeled Guarascio and Port as “two guys who didn’t know what they were getting into.”

One point of contention for Dan Harmon in regards to Season 4 was the inclusion of character Jeff Winger’s father, played by James Brolin. Harmon went into detail about how he had designed Joel McHale’s character Jeff off of Bill Murray’s character John Winger in Stripes. He had hopes that someday Murray would do a guest spot on the show as Jeff Winger’s papa.

This prompted him to express his true feelings (his more metaphorically and graphically-inclined feelings) about last season, which were a bit more extreme; as well as his second shot at Community.

Another colorful metaphor that Dan Harmon threw out there was comparing watching a new season of Community without his involvement to “flipping through Instagram just watching your girlfriend blow everyone.”

Dan Harmon might have laid down some harsh words, but they weren’t entirely undeserved. I mean, have you seen the fourth season of Community?