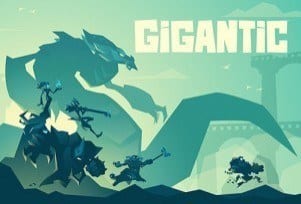 There’s no point tip-toeing around the fact that Gigantic was my “Game of the Show” for PAX East 2015. It was equal parts fun, exciting, and difficult. From the art style to the gameplay, everything I experienced (during the admittedly small window I had) made me think that this is the next title to make a splash, both with fans and in the eSport world. Gigantic is fitting because it’s both the name of this fast-paced combat game, and the expectations I have for it.

The pregame to my hands-on time was spent in front of a wall where Motiga, the developer, had hung pictures of each playable character, including the two announced specifically during PAX East. Each poster gave a brief description of the role that the characters play. My “coach” for this meeting, Game Designer John Hargrove, explained who each character was and provided a brief synopsis of the skills that I could expect to see when playing them.

For the sake of a good story, I settled on Wu, a martial arts master who also happens to be a frog. Hargrove was subtle in his suggestions that Wu might be for players a little more experienced than I am, but it’s a Kung Fu frog. How can you not choose to play a Kung Fu frog? We sat down at our kiosks for our first Gigantic experience and, while it’s going to be available on Xbox One, the show featured only PC options.

For those of you familiar with the gameplay of MOBAs like League of Legends or DotA 2, the map layout will be familiar. Gigantic doesn’t have the three lanes quite as defined as your prototypical MOBA, but the map is laid out in a similar fashion. Each team has three points on their side of the map, labeled A-F, and you capture your initial three points as quick as possible. Doing that gives you the option to grow your own creature on that point, each with their own special ability. Area healing, for tactical retreats, is used often, but I prefer the critter that drops a limited radar in his vicinity. It allowed me to see which enemies were around me and, as you’ll find out, I took advantage.

After establishing your initial three points, you then move into enemy territory to begin your skirmishes and try to take the enemy’s points. By defeating your enemy and taking points, you’ll earn XP that allows you to increase your abilities. Each ability, of which you have four, has a specific tree you can move through, allowing for very different builds on the same character every time you play. During my play time, Hargrove explained that every character has a polar opposite that does well to essentially “cancel out” your abilities. Meaning the balance of the game is set in a way that no one character is going to ensure a victory. However, because of the ability to customize your abilities, even if you’re going against a character who is designed to keep yours in check, you can upgrade him (or her) in a way that helps your own cause.

It was a few minutes into the math when I was told that our Titan, the “gigantic” creature (a dragon in our case) that lives in our HQ, was moving out to battle the opponent’s Titan, a griffon. This is the entire point of the contest, to rack up kills and capture points so that our Titan will leave his haven in order to give us a chance to win the game. As the two battled, eventually the enemy’s Titan was knocked down, opening it up to attacks. We moved in as a team and did considerable damage before it stood up, forcing us out once again. “Do that three times,” Hargrove said, “and you win the game.”

It was about that same time when Hargrove changed from “Coach” to “Admirer.” After heeding advice about which skills were best used in specific scenarios and when to attack versus falling back, I fell into a rhythm. The words NEMESIS! flashed up on my screen and were quickly explained as, “When you kill the same enemy three times and they haven’t killed you, you’re their Nemesis.”

Those words popped up three more times before I had my second death.

The magic of the game had noticeably settled in when, as scenarios were playing out in front of me, Hargrove would begin to offer advice on how to proceed, only to stop halfway through as I executed what he was going to say before he finished the thought. Soon, across the room you began to hear developers grumbling and, eventually, raising their voices asking “Who’s playing Wu!?” and “We need two people to get on that side because whoever is playing Wu is kicking our asses.”

It’s always a bonus when you’re first experience with a game is a good one, and who’s to say whether the development team we were playing was letting us win or not, but at the end of the match the team of first-timers had squelched a team familiar with the game, my final tally being 19 kills and 5 deaths. Assists weren’t counted, because the only people who talk about assists are the ones who can’t get kills.

What I had witnessed didn’t really hit me until later. I spoke with some of the developers, Coach Hargrove mostly, about what the game is, how they’re proceeding, their excitement, and all sorts of implements that may come later, but it was only when I looked back that I realized what had happened. A developer, someone who works on the game every day and, assumedly, hits points where he’s just aching to do something else, got excited watching a match. Excited to the point where he was talking trash, politely, about what he was witnessing.

While I’d describe Gigantic as a sort of “MOBA meets World of Warcraft Dungeon Raid meets PvP,” perhaps the most impressive description I could bestow is that, “It’s an eSports title that will take the scene by storm.”