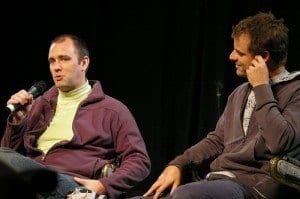 South Park creators Matt Stone and Trey Parker are being sued by Exavier Wardlaw, creator of the children’s show The Lollipop Forest. Wardlaw claims the show ripped off his lollipop character and defiled it. The character was allegedly exposed to “unwholesome language and sexual innuendo.”

In these three episodes of South Park entitled “Imaginationland” the Lollipop King was shown being choked by a Storm Trooper, witnessing a suicide bombing and watching Kyle and Cartman engage in oral sex.

Creators, producers, directors and writers all disregarded the public copyright notice and used The Lollipop Forest for financial gain without permission or attribution of authorship or compensation for use. According to The Wrap, “The ‘South Park’ television broadcast diminished/tarnished the value of The Lollipop Forest as a wholesome family show by association within the context of unwholesome language and sexual innuendo.”

The “Imaginationland” episode even won an Emmy for Outstanding Animated Program for One Hour or More.

The Lollipop Forest creator demands that all references to the show and the characters derived from it are to be removed immediately.