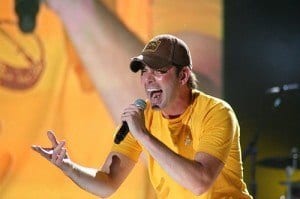 After a martial dispute, the couple has decided to call it quits.

Rodney Atkins has filed for divorce and according to his attorney; Atkins did not assault his wife last month.

According to the Washington Post, Atkins was arrested November 21 under the charges of domestic assault. His wife, Tammy Jo Atkins told police that her husband had been drinking one night and tried to suffocate her with a pillow.

However, attorney Rose Palermo said that this statement is “completely untrue.”
According to Palermo, that night there was only a “verbal dispute” between Atkins and wife.

Tammy Jo Atkins is seeking full custody, alimony, child support and distribution of assets. The hearing for the case will be held December 20.

Palermo said, “Mr. Atkins wants to thank his fan for standing by him and he is confident the truth will prevail.”