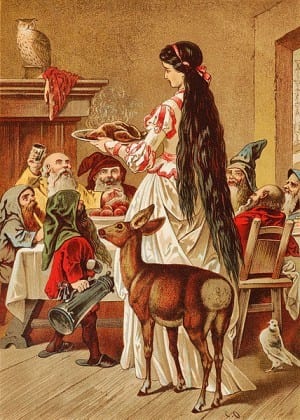 The film debut have critics as twisted as the film

Snow White and the Huntsman holds the critics attention. The visuals, big thanks to CGI, and the dark-twisted rendition of an age-old tale have many critics split.

Rotten Tomatoes rated the film 46% on the Tomatometer, but audiences beg to differ with an overwhelming 74% of audience liking the film.

Many critics are comparing the film to Mirror, Mirror, another Snow White-inspired film released earlier in the year. The film features Lily Collins playing another, atypical, battle-hungry, Snow White and Julia Roberts as the evil queen. Mirror, Mirror mainly a charming Snow White story that doesn’t stray to far from the age-old tale holds no competition to Snow White and the Huntsman atypical, twisted fantasy.

Rolling Stone writer Rupert Sander distinguishes the two films as, “Not in the way of the chirpy, witless, postcard-ready Mirror Mirror, in which Lily Collins played an unthreatening Snow and Julia Roberts merely swanned around as the Evil Queen.”

David Edelstein, writer of NPR, states, “No, Snow White and the Huntsman is not your father’s Snow White, and more to the point not your Uncle Walt’s. It’s definitively anti-Disney, bleak and brutal, rife with starving peasants, the tone close to Game of Thrones, with a stepmother queen played by Charlize Theron who literally sucks the youth out of female prisoners in an attempt to keep wrinkles at bay.”

The film has Charlize Theron playing Ravenna, the youth-obsessed queen who killed Snow White’s father. After the king’s demise, Ravenna locks Snow White, played by Kristen Stewart, in a tower after being told by her mirror her stepdaughter surpasses her in being the “fairest of them All.” Snow later escapes into the Dark Forest, and her jealous step-mother hires the drunken Huntsman, Chris Hemsworth, to go after Snow and kill her.