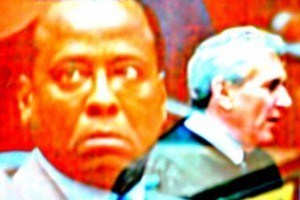 Conrad Murray could face up to four years in prison

The Conrad Murray verdict is in and a jury has found him guilty of involuntary manslaughter.

ABC reports that Dr. Murray faces a maximum sentence of four years in prison as a result of his conviction of involuntary manslaughter in the death of Michael Jackson. It is possible, however, that Murray may not do time behind bars. The lightest sentence he could receive would be probation.

“It will be very difficult to achieve an appropriate sentence of incarceration for Conrad Murray,” District Attorney Steve Cooley said Monday.

Overcrowding in California prisons and Murray’s lack of a poor criminal record number among the reasons why Murray might not be sent to prison. However, the high-profile nature of the case may play a role in Judge Michael Pastor’s ruling.

“This is not a crime involving a mistake of judgment,” Pastor said. “This is a crime where the end result was the death of a human being. That factor demonstrates rather dramatically that the public should be protected.”

Pastor is scheduled to sentence Murray on November 29. Murray was denied the opportunity to remain free without sentencing, as Pastor ruled “public safety demands that he be remanded.”

Read more about Conrad Murray and the verdict of involuntary manslaughter here.