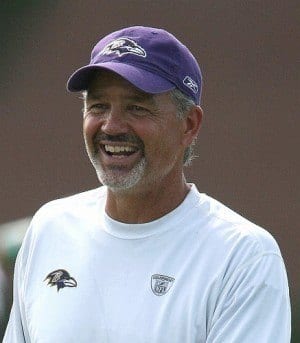 Chuck Pagano to be hospitalized for several weeks; offensive coordinator to take over coaching duties

Chuck Pagano, coach of the Indianapolis Colts, has been diagnosed with leukemia. Amid reports that Pagano was in the throes of a “serious illness,” Colts owner Jim Irsay announced at a press conference today that the diagnosis is for a very treatable form of the disease.

“I am very optimistic that he will beat this thing,” Irsay said at the conference. Chuck Pagano was diagnosed with a form of cancer called acute promyelocytic leukemia, or APL. If a case is detected early, there is a 90 percent chance of survival with certain treatment methods, according to the National Cancer Institute. Symptoms include fatigue and abnormally easy bruising, which is what Chuck Pagano noticed over the past few weeks and the reason he decided to visit his doctor.

The coach, who is 1-2 so far in his first season with the Colts and used to be a defensive coordinator for the Baltimore Ravens, was hospitalized last Wednesday and will at the very least miss the upcoming game against the Green Bay Packers. Bruce Arians, the Colts’ offensive coordinator, will take over as head coach while Chuck Pagano is in the hospital for the next six weeks.

“He is ready to take this fight on, and he is a fighter,” Irsay said at the conference.