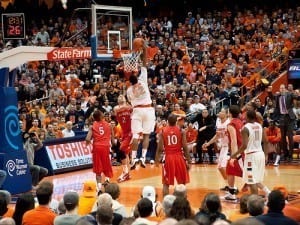 Different coaches have different ways of reaching players. Some use the Roosevelt method; that is, speaking softly but carrying a big stick. Others prefer a hardnosed approach that turns every practice into a boot camp.

But when it comes to men’s basketball practices at Rutger’s University, no boot camp was ever this bad. Head coach Mike Rice was as cruel as coaches come, and he lost his job Wednesday as a result.

The occasional rumor had swirled in the past about Mike Rice’s unique approach to coaching. But a viral video released last week shows just how violent that approach was. The shocking 30-minute video shows Rice berating and even harming his players in a plethora of ways.

The video includes Rice throwing basketballs at players’ groin areas at high speeds, taunting them with swear words and berating them with gay slurs.

The University found out about the abuse four months ago, but at the time was embroiled in negotiations to join the Big Ten conference. Any bad publicity at the time would have cast doubt on their bid, and closed the door to an exceptional amount of TV revenue and exposure for the school’s basketball team.

At the time, Rice was suspended for three games, fined $50,000 and ordered to take anger management classes. Tim Pernetti, Rutger’s University’s athletic director, said he didn’t think Rice should be fired at the time but has now changed his mind.

“I thought it was in the best interest of everyone to rehabilitate, but I was wrong,” Mr. Pernetti said. “Moving forward, I will work to regain the trust of the Rutgers community.”

Rice conducted an impromptu press conference outside his home Wednesday and apologized for his actions.

“I’ve let so many people down,” he stated. “My players, my administration, Rutgers University, the fans. My family, who’s sitting in their house just huddled around because of the fact that their father was an embarrassment to them.”

“It’s troubling, but I will at some time, maybe I’ll try to explain it, but right now, there’s no explanation for what’s on those films. Because there is no excuse for it. I was wrong. I want to tell everybody who’s believed in me that I’m deeply sorry.”