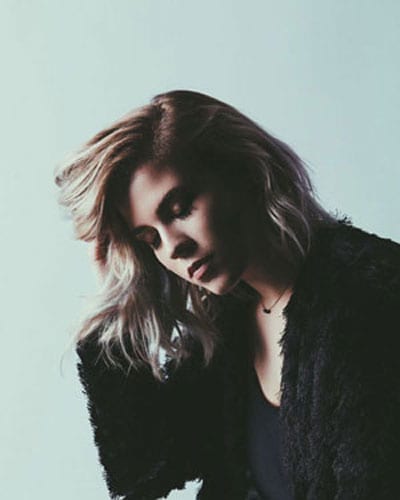 Inspiration, learning drums and mysogyny in the music industry

With her debut album “Ties” making waves in the indie music scene, we caught up with upcoming artist, SEE, to have a chat about the album, her musical inspiration and the future of her music. We also got to hear from someone who’s experienced what it means to be a woman in the music industry in this honest and open interview.

CN: Hi SEE! First of all, how would you describe your sound for those who are just being introduced to your music?

SEE: I would say that my sound is a blend of alternative-rock and pop with some singer/songwriter influences.  Also lots of reverb and ambience is involved! The songs on the EP definitely vary a little bit and showcase those different influences.

CN: So, you’re a self-taught multi-instrumentalist; tell us where it all began?

S: So I basically begged my parents to get me a drum kit when I was 13, and once they caved in, the drums became my first main instrument. At the time I was listening to a ton of bands and my goal was to start a band and be one of the main songwriters and the drummer. I could hear the songs in my head and I decided that I needed to learn every instrument so that I was able to record it all and show people properly. Singing came into the equation much later.

CN: How does a typical day go, in the life of SEE?

S: It really depends on the day. Currently a lot of my life is very last minute. At this point in my career I can get an email about a huge opportunity that is a week away, and then my entire plans for that week have to shift to accommodate the opportunity. I would say that my days generally always include social media planning, practicing or a rehearsal of some sort and songwriting. When I have gigs, my day is dedicated to preparing and traveling there, and eating at new places along the way.

CN: Tell us about your debut album “Ties”.

S: I’m really proud of Ties and it was my first time professionally recording and having so many wonderful people involved in the creative process. Lyrically the record is about my relationships with people in my life and how those relationships change over time. Some of the songs are three years old and some were written right before recording. So it covers a pretty big chunk of my life. I think there’s something for everyone on it as well. There’s a lot of softer, sweeter moments and then some bigger louder moments, so I hope that having those dynamics keeps everyone engaged.

CN: You’ve worked with quite a few big names in the game! Do you have a dream collaboration?

S: I don’t have any particular person in mind that I would call my dream collaboration. I love working with anyone that I can. It would be fun to song-write, produce or perform with someone who is in a completely different genre than me because I haven’t yet had a lot of experience outside of the alt-pop world.

CN: Outside of music, do you have any other artistic interests?

S: I’m a visual artist and do all of my own design work, so that’s another creative outlet for me. I’m also very into makeup and I spend a lot of my free time watching makeup artists and tutorials online. Up until recently, I was never a makeup person, but it’s given me a whole other form of expression so it’s been a lot of fun exploring that side of me.

CN: What does it mean to be a woman in this industry, according to you? Have you faced any challenges, etc.?

S: Being a woman means that you’re generally going to be taken less seriously than male counterparts. A lot of the attitude that I get from men is very engrained and I don’t even think they realize the misogyny behind what they do and say, but it’s constantly there. Nicki Minaj has this amazing quote, I don’t remember the specifics but it was along the lines of women not being able to speak up for themselves without it being this massive ordeal, and we’re seen as “bitchy” and “aggressive” when we care about our art and what we put out to the world. I’ve noticed especially that men cannot handle a woman taking control. Nicki also talked about women having to be everything all at once. And it’s so true. That being said, I’ve learned a lot so far and navigating it all is getting easier.

CN: Let’s talk about heartbreak—do you think this is a powerful motivator when it comes to writing music?

S: I think love and the feelings that come with it is absolutely a powerful motivator, if not the strongest. That includes heartbreak and the difficult sides of love. When artists put those raw feelings out for the world to take in, people notice it and they can connect with it on a real level. I’m always a fan of writing about things I’ve actually experienced. Someone can write an incredible song both lyrically and musically, but if the emotional connection isn’t there, it doesn’t matter what the person is singing because the audience will be able to tell that it isn’t genuine.

CN: What advice would you give to other young women pursuing a career in music?

S: My advice would be to follow your gut. If something seems wrong, it probably is. Try your hardest to not let people influence you to give up on a music career, or to do things with that career that feel uncomfortable to you. It’s a tough road but it’s been incredibly rewarding so far and I wouldn’t want to have my life be any other way.

S: I have some awesome shows lined up for the month of November right now. Info on those can be found on my website. A tour is definitely in the works for 2017 though, I would love to get out on the road and visit cities that I haven’t had the chance to play yet.

If you want to keep updated with SEE’s upcoming shows: http://www.eyespysee.com/