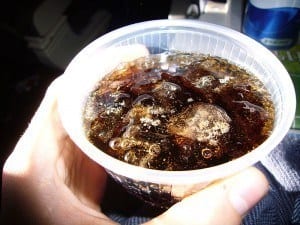 A new California law has forced Coke and Pepsi to change their caramel coloring recipe.

Coke and Pepsi are changing but don’t worry, there won’t be a taste difference.

Coca-Cola Co. and PepsiCo Inc. are changing the way they create their caramel coloring used in the sodas due to a California law that says drinks with a certain amount of carcinogens must be labeled with a cancer warning label, according to TIME.

While the drinks in California have already been altered, the companies have begun to proceed nationally.

According to Beverage Digest, Coca-Cola and PepsiCo account for nearly 90 percent of the soda market.

The American Beverage Association said that its member companies are not going to discontinue the use of caramel coloring but simply make adjustments to fit California’s new criteria.

The association released a statement. “Consumers will notice no difference in our products and have no reason at all for any health concerns.”

Diana Garza-Ciarlante, representative from Coca-Cola said that the company has informed its caramel suppliers to change how they process which will reduce the level of the chemical 4-methylimidazole, that can sometimes form during the cooking process.

Garza-Ciarlante stated  in an email, “While we believe that there is no public health risk that justifies any such change, we did ask our caramel suppliers to take this step so that our products would not be subject to the requirement of a scientifically unfounded warning.”

The Center for Science in the Public Interest filed a report in February with the Food and Drug Administration to ban companies using ammonia-sulfite caramel coloring.

Though the petition is still being reviewed, a spokesperson from the Food and Drug Administration says that a consumer would have to drink more than 1,000 cans of soda a day to reach the levels that have links to cancer.

The American Beverage Association said that although California added the caramel coloring to its list of carcinogens, there have been no studies linked that it causes cancer in humans. The listing, they noted, is based on a study that used lab mice and rats.