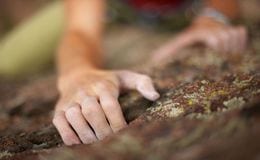 Alex Honnold climbs in Yosemite National Park with no ropes, no harness

Alex Honnold, a 26-year-old rock climber from Sacramento, California is being called the “best climber alive” after his most recent climb, reports CBS News. “60 Minutes” recently covered Alex Honnold’s attempt to scale at 1,600 foot rock surface at Yosemite National Park. What’s so special about Honnold’s climb? That would be his method—he uses no ropes to guide him or protection to catch him. Honnold wears rubber climbing shoes and straps a bag of chalk to himself, which he uses to keep his hands free of sweat. These are his only aides.

The climbing practice, dubbed “free-soloing,” is obviously extremely dangerous and is only suited for the truest of thrill-seekers. In fact, less than one percent of people who also consider themselves climbers even attempt it. Honnold defies both this statistic and gravity by having completed over a thousand free-solo climbs. He is the only person known to have free-soloed the northwest face of Half Dome (also in Yosemite).

“60 Minutes” correspondent Laura Logan recently interviewed Honnold, and while you may have a picture of him as a restless adrenaline junkie, he revealed to Logan that his state of mind during a climb is quite opposite. “There is no adrenaline rush,” he says. “If I get a rush, it means that something has gone horribly wrong, because the whole thing should be pretty slow and controlled.” Honnold’s tremendous feats put him in incredible peril every time, but he shows no signs of stopping.

Logan also interviewed John Long, who was a rockstar of climbing in the ‘70s. When asked what he believes is Honnold’s greatest accomplishment so far, Long replied, “that he’s still alive.”