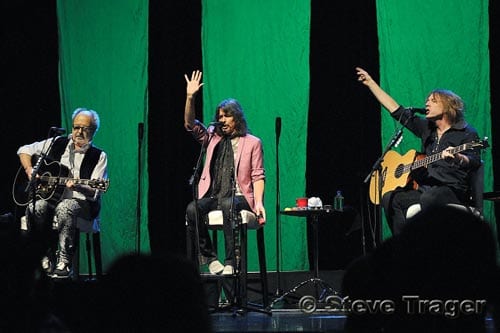 Classic rock band Foreigner are currently traveling America and Europe with an acoustic set of their best-known tracks and will be on the road well into 2017. Foreigner, currently a six-piece outfit, still manage to “raise the roof” worldwide with their hits, ballads and guitar-driven melodies. Since Kelly Hansen became Foreigner’s vocalist in 2005, their live shows have been nothing short of spectacular and the classic rock band’s acoustic set in Philadelphia this October was no exception. I was certainly surprised with this amazing acoustic touring schedule.

The classic rock band performed this acoustic show as if telling a story with a track-list of certain songs that played a key role in their success. Mick Jones also recalled some great songwriting moments. The show comprised of over a 100 minutes of acoustic heaven displaying the classic rock band’s history and back-catalogue. The set opened with “Double Vision” from their first recording in 1976; a true classic that is still heard on Rock Radio today and definitely never gets old. It was a great evening of music with classic rock band, Foreigner, performing music from the beginning of their formation right through to the late 90s. Many of the band’s songs are cemented in our minds with guitar-riffs and anthem-style lyrics. Foreigner recreated more than just a typical classic rock show—even though the venue was small—with this acoustic set.

Kelly Hansen’s vocals sounded great as always, never missing a note and bringing a fresh voice to the classic rock band that continues to impress loyal fans. Foreigner maintain a genuine interaction with fans and the sentiment shined during this acoustic set as thousands sung along to such classics as “Cold as Ice”, “Urgent”, “Waiting For a Girl Like You”, and “Feels Like The First Time”. The band harmonized beautifully during their acoustic set. Sitting in the front row, I could hear the clean and crisp sound of the vocals and guitars filling the entire room. For many of who aren’t able to watch Foreigner (or any other band) play an acoustic show, I highly recommend picking up their CD “Live and Acoustic”. Music is a lifestyle for a lot of us and we thrive on the melodies and great lyrics in music. Foreigner are one of those bands who have long entertained us with great rock ballads and haven’t failed to impress with this acoustic show.

• Double Vision
• Long, Long Way from Home
• Say You Will
• Waiting for a Girl Like You
• When It Comes to Love
• Fool for You Anyway
• Dirty White Boy
• That’s All Right
• The Flame Still Burns
• Cold as Ice
• Girl On the Moon
• Feels Like the First Time
• Juke Box Hero
• Hot Blooded
• I want to Know What Love Is

Previous ArticleTrivium Share Early Demo “The Storm” from Ember to Inferno: Ab Initio ReissueNext ArticleWhat to Do After Graduation