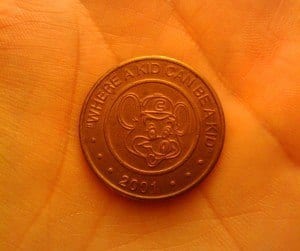 The kid-centered restaurant began back in 1977, bringing children and adults a world of arcade games, animated rodents and cheesy pizza.

According to Yahoo, they currently have over 500 stores around the world and bring in quarterly revenues around $200 million.

The man behind the mouse is Nolan Bushnell, who is also infamous in the video game world. Bushnell helped co-found Atarti in 1972.

Bushnell said about his restaurant chain, “I guess that I have never been surprised that the chain has lasted this long. There will always be a place for kids, and I’m proud that it has given so much joy to so many young kids, though not always to their parents.”

Though Bushnell is no longer involved with the restaurant, he reflects on how Chuck E. Cheese was imagined as another animal and not the mouse he is today.

“The project started as Coyote Pizza. We thought that a Coyote would be a great mascot. I purchased what I though was Coyote costume from an amusement park walk-around costume vendor and had it shipped to the company. When it got here it was obvious to everyone but me that it was a rat costume.

Chuck’s reputation started off as a mouse with a New Jersey attitude that interrupted his guest, but over the years, his image has softened.

Due to the various tokens that the restaurant has gone through over the years, some of the tokens like one from 1994 can be appraised up to $15.

The most common misconception with Chuck E Cheese is that it’s strictly for children.
Justin Bieber and girlfriend Selena Gomez were spotted at one of the restaurants last weeks, and one Virginia couple made it the place to celebrate Valentine’s Day.

Bushnell says, “An unintended result of the chain is that it became the perfect place for divorced or widowed parents to meet a new mate. There have been thousands of marriage by people that met at a Chuck E. Cheese’s.”