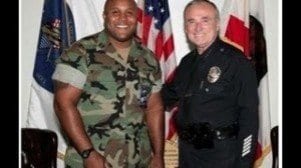 Is Christopher Dorner dead? Police are speculating that this may be the case after a man who is believed to be Dorner engaged in a shootout with police from a cabin in Big Bear Lake, Calif. that left one sheriff’s deputy dead and another wounded. Following the shootout, the cabin burst into flames and burned down.

The remains of a body were found inside the cabin after the fire was extinguished, and police believe the body is Dorner’s, as his driver’s license was found near it.

A manhunt for Christopher Dorner by the Los Angeles Police Department was ongoing after he killed four people last week. An ex-Los Angeles police officer, Dorner, 33, was upset that he was laid off and sought revenge, targeting law enforcement officials, particularly his ex-coworkers.

Prior to his supposed death, Dorner posted a video on the Internet speaking of his anger and saying that he projected he would die in a huge confrontation with police. The LAPD offered a $1 million reward for his capture and took precautions to offer over 50 police officers’ families 24/7 protection.

Leading up to the shootout, game wardens from the California Department of Fish and Wildlife saw a purple Nissan that was reported stolen and followed it. They suspected the driver to be Dorner. After losing the Nissan, a white pickup truck drove toward the wardens’ vehicle, and the driver, who is reported to be Dorner, fired shots at the wardens.

The wardens returned fire, and the pickup truck crashed at the roadside. The driver ran to the cabin where the shootout ensued.

According to the Associated Press, law enforcement said a single shot was heard from inside of the cabin before the fire began.