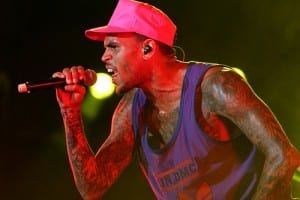 Chris Brown, seemingly eager to keep up his reputation for violence and controversy, sported a fitting costume for Halloween this year—a terrorist. The 23-year-old and his buddies dressed up wearing long beards, turbans and fake guns as they made an appearance at Rihanna’s Halloween party at Greystone Manor in West Hollywood.

Brown was quick to Instagram a picture of him and his crew with the classy and grammatically correct caption reading “Ain’t nobody [expletive] wit my clique!!! #ohb.” In the photo, Chris Brown is holding a large, fake (hopefully) assault rifle in the air, surrounded by his fellow terrorist friends who are covered in fake ammo.

Chris Brown’s mother, Joyce Hawkins was quick to defend her son’s ensemble, chiming in on Twitter saying, “HALLOWEEN IS FOR FUN NOTHING MORE THAN JUST FUN. GET A LIFE PLEASE.” Calm it on the caps lock there, Joyce. If your son, who famously pleaded guilty to assaulting Rihanna, dresses as a terrorist for Halloween, it may stir up some controversy.

Brown’s Carpe Diem world tour is set to kick off on November 17th.