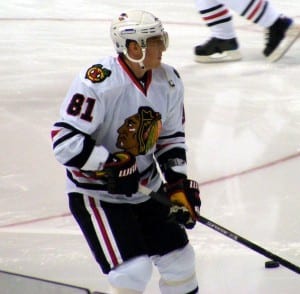 Chicago Blackhawks star Marian Hossa was knocked unconscious and taken to the hospital on a stretcher last night after a crushing blow from Phoenix’s Raffi Torres.

Hossa was later released from the hospital and is expected to recover, but the Chicago Blackhawks are really short-handed now, as Andrew Shaw was suspended three games Tuesday for his hit that knocked Phoenix goalie Mike Smith to the ice in Game 2.

Torres was already somewhat reviled amongst Chicago Blackhawks players and fans. Last year, he knocked Brent Seabrook to the ice while playing for Vancouver.

“Of course we’re angry. It’s a natural reaction for anybody,” Chicago captain Jonathan Toews said. “Everyone loves Hoss, respects him and loves him as a teammate. … We wanted to win that game for him tonight, but came up short. We’ve got to focus on getting the next one for him.”

The hit by Torres did not draw a penalty, causing outrage from Chicago coach Joel Quenneville. “It was a brutal hit,” Quenneville said. “I saw exactly what happened. It was right in front of me. How four guys missed it was hard. The refereeing tonight was a disgrace.”

Hossa’s injury sparked concern from the Phoenix Coyote players as well. “It’s scary. Your heart goes out to him and his family. It’s past hockey,” Smith said.

Phoenix prevailed 3-2 over Chicago Tuesday night in the teams’ third straight overtime game. “It’s a terrible goal. We dominated overtime. I thought I was feeling good the whole game long. I feel bad I gave them that one after the guys battled in overtime like that. It’s definitely on me,” said goalie Corey Crawford.

Chicago Blackhawks are now trailing the Coyotes 2-1 in the series with Game 4 Thursday night.