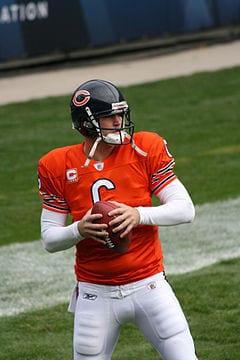 Jay Cutler breaks thumb, could be out for six to eight weeks

The good news for Bears fans – Chicago defeated the San Diego Chargers Sunday 31-20. The bad news – quarterback Jay Cutler broke his right thumb and is expected to be sidelined for six to eight weeks, essentially the rest of the season.

Cutler was injured during Sunday’s game as he tried to tackle Chargers’ cornerback Antoine Cason, who intercepted his pass with 10 minutes, 3 seconds left in the game. While Chargers linebacker blocked him, the Bears’ running back Matt Forte was about to keep Cason from scoring.

Bears’ head coach Lovie Smith said Sunday, “Maybe Jay’s biggest play of the game came on that interception, buying time for Matt Forte. Who would have thought we’d be talking about Matt Forte and Cutler on a defensive play they made?”

According to the Chicago Tribune, the Bears do not intend to put Cutler on the injured-reserve list. He may have a pin inserted surgically into his throwing hand thumb to speed up the healing process, meaning Cutler could return just in time for the playoffs. Assuming, of course, that the Bears can continue their winning streak with backup quarterback, Caleb Hanie.

According to the Washington Post, in a WBBM radio interview Monday, Smith would not comment on how long his quarterback will be out of play. “Jay does a have a right thumb fracture. Of course we took X-rays last night, and he’ll be seeing a specialist this morning and we’ll be able to tell you a little bit more after that.”

For information on Cutler and the Chicago Bears, go here.