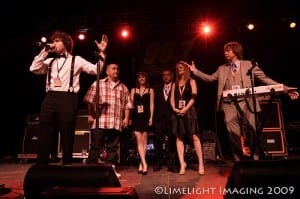 Bobby Bones Show, formerly hosted in Austin, Texas, is a nationally syndicated mainstream top-40 show, hosted by the one and only Bobby Bones weekday mornings on KISS FM.  For the past four months, Bobby Bones has been hiding a secret that he was finally able to let fly this Monday, the Bobby Bones Show is moving to Music City, that is Nashville, Tennessee, starting Feb. 18.

The new Bobby Bones Show location will definitely be picking up the Nashville flair, and Bobby has promised that “well, we are going country. Going to be the biggest country show in the US. Crazy” on his Facebook page.

Bobby is taking co-hosts Lunchbox and Amy with him, so listeners are guaranteed the classic flair and antics that accompany the popular morning show.  His show will also still be broadcast in Austin on KASE 101, so that faithful listeners can keep up with the Bobby Bones Show, and in fact the move means that the DJ will extend his reach far beyond the dozens of cities he can be heard in so far.

Regarding his move from the Weird City, the DJ has nothing but love for Austin as he moves away to Tennessee.  “This was my first ever morning show right after college,” Bones said on this morning’s Bobby Bones Show. “Austin is my home and I’m proud to represent the city and the fans that made the show so popular.”

Listeners will remember the spontaneity and fun the Bobby Bones Show brought, like Lunchbox’s personal marathon, undertook to prove that he could run the full 25+ miles with no training.