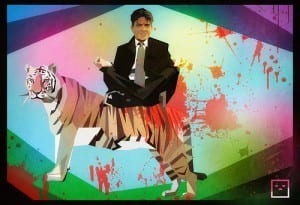 The man/tiger hybrid reportedly purchased the ring at auction for $230,401

Charlie Sheen is reportedly the lucky new owner of Lawrence Taylor’s Super Bowl XXV ring, at the cool, low-price of $230,401, according to Jay Glazer with FOX Sports.

To be clear, Glazer did not officially report that Charlie Sheen is the new owner of the Super Bowl ring but instead reported that he was told by Lawrence Taylor and his agent, Mark Lepselter, that the winning bidder for Taylor’s ring was Charlie Sheen.

Neither Charlie Sheen nor the auction house where the ring was sold has commented on the matter.

Charlie Sheen is well-known for his collection of sports memorabilia, as well as his drug-fueled sexcapades and ultimately hilarious tirades. Sheen once told ESPN’s Dan Patrick that some of his items include Babe Ruth’s 1927 World Series ring and the contract that sold Ruth from the Red Sox to the Yankees. Charlie Sheen also once bought all the bleacher seats to a Los Angeles Angels game in order to try to catch a Cecil Fielder home run.

Lawrence Taylor played 13 years with the New York Giants before being elected to the Hall of Fame. Taylor, L.T., is considered by many as one of the greatest linebackers of all time.

Taylor has suffered through financial difficulties for years, filing for Chapter 7 personal bankruptcy in 1998.

Lawrence Taylor, like Charlie Sheen, has been linked with drug usage in the past, having been arrested numerous times on crack cocaine charges.