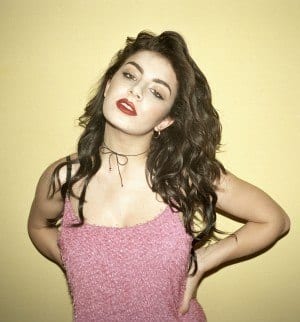 British singer-songwriter, Charli XCX recently shared news about her second major-label album prior to her pre-show performance at the VMAs this past weekend.

Her sophomore album, Sucker will be dropping Oct. 21 via Neon Gold/Atlantic Records as the follow up to 2013’s True Romance. Charli has also shared a music video for the first single off the album, “Break the Rules.”

The songstress has garnered much success since co-writing “Fancy” and singing a hook on the track alongside Iggy Azalea. She received five nominations for the 2014 MTV Video Music Awards which included nominations for Best Female Video, Video of the Year, Best Pop Video and Best Art Direction.

In addition, Charli’s “Boom Clap” earned her an Artist to Watch nomination along with 5 Seconds of Summer, Fifth Harmony, Sam Smith and Schoolboy Q.

In an interview with Entertainment Weekly, Charli opened up about her forthcoming album, stating that she’s been working with a mixture of people on the album, but said that it all started in Sweden.

“It all started off earlier with me and Patrick in Sweden getting really angry at pop music. That’s how this whole album started,” she said. “There’s definitely a punk energy that runs throughout the record. Some people will hate it, but I’m really excited about it because I know some people will absolutely love it as well. I feel like that’s what a good album is. It’s very feminine, it’s raw. I see it as being like the color red when I listen to it.”

Sucker is now available for pre-order.