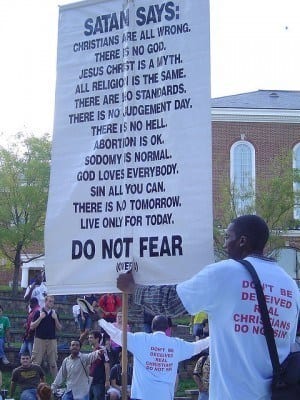 Can you push Religion

Can you PUSH religion on people? I don’t think that there is a such thing as forcing religion on anyone. In fact, it seems that it is the easiest thing to simply ‘Slide’ into. Something that seems to have been lost on this generation, something that definitely needs to make its way back into the forefront of our society, is also one of the most shunned subjects and topics to be discussed. Do you believe in God? That seems like a pretty straight forward question. At least if you look at it in the way that most Christians do. The answer can only be one thing and that is, Yes! Unfortunately, there is not always a cut and dry way that people look at these things and college seems to be the easiest place to slip away from the fundamentals that had been instilled in us at the earliest of ages. Rather than thinking of God and ways to draw near to him, college years are packed with parties, sex, experimentation and other things that aren’t exactly the holiest. So, what makes it so easy for students to run away from their Christian roots and come to the conclusion that they are untouchable? Well, let’s just look at the culture that we live in today. Yep, the era of idolizing individuals that we have never met and most likely never will; the era of Celebrity. These celebrities are the most buzzed about Atheists today and they aren’t ashamed to admit it. –Although they should be Afraid to!- (Quotes from a few celebrities that lack God) • Emma Thompson: “I’m an atheist; I suppose you can call me a sort of libertarian anarchist. I regard religion with fear and suspicion. It’s not enough to say that I don’t believe in God. I actually regard the system as distressing: I am offended by some of the things said in the Bible and the Koran, and I refute them.” –Her response toward her religious beliefs… Which she has none of! • Daniel Radcliffe: “I’m an atheist, but I’m very relaxed about it. I don’t preach my atheism, but I have a huge amount of respect for people like Richard Dawkins who do.” –Another crazy comment! • Javier Bardem: “I’ve always said I don’t believe in God; I believe in Al Pacino.” –Do not worship false idols! • Julianne Moore: “Well, I guess you were wrong. I do exist.” –Her response to what she would expect to hear from God at the gates of Heaven. • Keira Knightley: “If only I wasn’t an atheist; I could get away with anything. You’d just ask for forgiveness, and then you’d be forgiven.” – Obviously she has NEVER read the word of God! • Paul Giamatti: “My wife is Jewish and I’m fine with my son being raised as a Jew. … I will talk to my son about my atheism when the time is right.” –They must not know that a house divided against itself will not stand! • Billy Joel: “No. I’m an atheist.” –His ignorant response when he was asked of his belief in God.