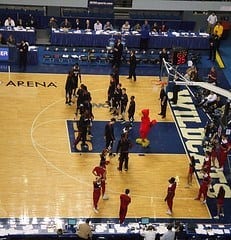 23 million people tuned in to the championship game

March Madness has always been, and always will be, a cash cow for whichever network has the rights to broadcast the action on TV. College basketball is popular on its own, to be sure, but March Madness brings out fans like very few sports events can.

For a few weeks in March, everyone cares about college basketball. This March, it was no different. The tournament had its fair share of great moments; Wichita State upset higher-seeded teams like Ohio State and Gonzaga; underdog Florida Gulf Coast went farther than anyone on earth thought they could; Trey Burke’s 30-foot three pointer in the waning seconds of Michigan’s game was exactly the kind of buzzerbeater people watch the tournament for.

But the real winner this year was the networks that hosted the tournament. This year’s championship game drew a viewership total of 23.4 million, a 12 percent increase from last year, according to CBS. As a whole, the tournament on any given day averaged 10.7 million viewers; that’s an 11 percent increase from last year and the highest average total in 19 years, according to Bloomberg.

CBS paid $10.8 billion for the rights to March Madness through 2024. Right now, that investment is looking priceless. For the fourth straight year, CBS stocks rose sharply due to tournament viewership totals; this year, the network’s stock rose 7.6 percent in March. CBS and its sister networks (TruTV, TBS, TNT) aired 67 games in total and recorded more than $1 billion in ad revenue.

Not bad for less than a month’s worth of work.

Interestingly, the relationship between networks and sports are getting cozier by the minute. ESPN, TBS and FOX are paying Major League Baseball a total of $12.4 billion worth of TV contracts. ESPN will pay the NCAA $7 billion just to air the college football playoffs. Time Warner Cable is considering creating an entire network around the Los Angeles Dodgers, which would cost $8 billion over 25 years.

It may cost a lot to buy the rights to air these sports. But for the networks, these events are truly priceless.