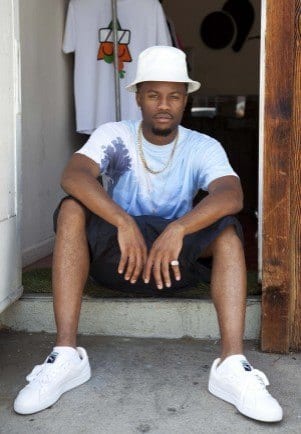 We also have a ticket giveaway for his Phoenix, Denver and Indianapolis tour stops

A founding member of hip hop collective Odd Future (OFWGKTA), Casey Veggies started his solo career at the young age of 14. In addition to being a successful hip-hop artist before he could even legally enter a club, Veggies is also an entrepreneur. Starting a popular streetwear clothing line called Peas and Carrots International, it’s hard to figure out what Veggies will have in store for society next. In the meantime Veggies will be touring the country and we are giving tickets!

Check out the interview we did with Casey below:

CN:  Casey– Do you want to introduce yourself to the readers?

CN:  Explain the name “Casey Veggies”, I know you have a special reason for it.

Casey Veggies:  It was something we came up with when I was 13 years old, and I just ran with it.  It just sounded good to me.  It sounded like a good idea.  I have a brand called Peas and Carrots, it started as a blog and then we started a clothing line, and now we have a store in LA.  I pretty much based my name off of the brand.  You know vegetables are just good for you all around!  And so I just ran with it.

CN:  That’s awesome!  It seems like you have a lot of things up in the air.  What motivates you?

Casey Veggies:  What motivates me?  My ambition, and just wanting to be great in life.  Just being successful.  Really, music is to me is more of a hobby. I just love creating music.  You know, I got into it when I was 12 years old, just writing songs and writing down ideas.  I just fell in love with it from day one.  And ever since then I’ve never looked back.

CN:  You’re really great at merchandising your brand (your music, the clothing line, etc.) does that come natural to you?

Casey Veggies : The clothing line I started, with one design.  We started it off simple.  We just kept building it up and building it up eventually we got our own store in LA.  It’s been doing really well and now we’re just revamping the brand.  And I’m trying to take it to another place.  I’m very excited in where it’s going to go.  We were in Zumiez last year and a few different stores.  I’m just trying to keep expanding it and see where it goes after I release my new album.

CN:  That’s so cool, so do you think you’re going to have stores opening up in different cities across the country? Is that the goal?

Casey Veggies:  That’s definitely the goal.  At this point.   Our brand,  abbreviated is PNC INTL  (Peas and Carrots international.)  The goal has always been to be worldwide.  Push the brand overseas and all across the United States.  That’s how we’re calling out, how we want to be recongnized on a wide scale.

CN:  Do you think that your clothing line and your rapping are on the same level?  Or are you using one to merchandise the other?  How does it work?

CN: So speaking of inspiring, who are some people that influence you?

Casey Veggies:  As a youngin’ I was definitely influenced by Kanye West as an artist.   And Nas and Jay Z, their business mind and Pharrell Williams, how he was involved with clothing, music and producing.  Not just limiting himself to one thing.  You know, Kanye West’s album College Dropout is one of my favorite albums.  In high school and growing up, it inspired me.  That was always my goal getting into music, was to inspire kids just like how I got inspired by music.

CN: What’s a day in the life like for you? You seem to have a lot on your plate.

Casey Veggies:  You know it’s a lot of work! I’m in New York right now doing a few things.  I’ve got a show tonight at SOB’s.  Right now I’m about to go to the Pullman’s store check some things out.  It’s not too hard, really I love working hard.  I’d rather be busy than not!

CN:  Exactly! When you have a day off you feel like you could be doing so much more.

Casey Veggies: Yeah, there are only 24 hours in a day so, try to make the most of it!

Casey Veggies:  The advice I’d have for them is to never get discouraged,  and to stay focused.  Believe in yourself the most and don’t worry if nobody else believes in you, just believe in yourself.

CN:  So what does the future hold for you?

Casey Veggies:  Through my ideas.  Through me.  Through my self expression, just inspiring people. That’s how I want to move. I want to do what I’m doing and for people to follow me naturally. No force.  I want people to just gravitate to the music, to the ideas to the art, the whole brand. You know?

CN:  So are there any areas or genres aside from music and fashion that you aren’t in currently, that you would like to get into eventually or are maybe just starting off in right now?

Casey Veggies:  Yeah, I just started getting into acting. I was in drama class when I was in middle school and I was lucky enough to get cast in the new movie Dope that’s coming out June 19th.  Forrest Whittaker, Pharrell Williams and A$AP Rocky.  It’s a super dope!  Coming out June 19th.

CN:  So it’s more of  a personal thing for you?

Casey Veggies:  Exactly.   I really felt the movie, and I grew up in parts of the neighborhoods they shot it in.

CN:  Can you give us a little bit of information on your album?  Is it almost ready?

Casey Veggies:  My album is done.  It’s finished. it’s a masterpiece. I’m very excited to release it.  I’ve been patiently waiting for a while.  It’s coming out this summer.”