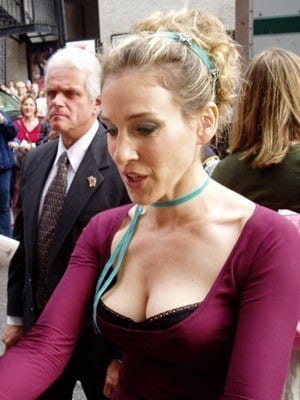 The Carrie Bradshaw townhouse in Manhattan’s West Village has sold for $9.85 million.

The Carrie Bradshaw townhouse, on Perry Street, was listed at $9.65 million in March, and raked in $200,000 more than the asking price.  It is the second time in six months the property has changed hands.

For nearly $10 million, the unknown buyer gets more than just the Carrie Bradshaw townhouse made famous on Sex and the City. The buyer is set up with five bedrooms, three bathrooms, an eat-in kitchen and a sun room. The home is spread over 4,100 square feet and four floors, plus a basement and backyard.

That’s a lot more space than Carrie Bradshaw ever dreamed of when viewers ventured in to her small roundabout-style studio apartment, with one bathroom, small kitchen, and an alcove for a bedroom. But she did have that killer walk-through closet.

Of course, the show also set the location of the Carrie Bradshaw townhouse as an Upper East Side home, but that’s how television works.

Project Runway’s Tim Gunn “made it work” as his home for 16 years. He occupied an upstairs apartment in the building.

The Carrie Bradshaw townhouse will remain on the Sex and the City New York tour, so whoever the owner is (both buyer and seller have kept their identities hidden by corporations) will probably have a lot of tourists taking pictures of their front stoop.