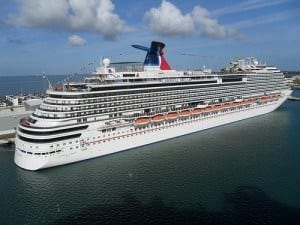 Carnival cruise ship Carnival Dream suffered from generator failure Wednesday, and as a result, Carnival Cruise Lines plan to fly all passengers back to Florida from its dock in Philipsburg, St. Maarten.

Though power to the Carnival cruise ship was restored, the ship still could not leave its port, according to CNN.

Captain Massimo Marino sent a letter to all passengers assuring them that they would be transported back to their cars or home destinations, refunded for three days of the cruise and offered a half-price future cruise.

According to Carnival cruise spokesman Vance Gulliksen, the Carnival Dream has 4,300 guests and 1,300 crew members on board.

Some passengers emailed CNN about toilets on the Carnival Dream overflowing because of the generator failure and elevators not working. Carnival responded to these comments with a report that only one public restroom had toilets overflow, and there was one request for cleaning of a guest cabin restroom.

Originally, Carnival decided to keep passengers on board the ship for accountability, but passengers were allowed to exit the cruise ship once decisions were made to fly passengers back to Florida.

The Carnival Dream was on a seven-day cruise from Florida. This is Carnival’s second issue with its ships, recently. Last month, the Carnival Triumph experienced an engine room fire that required tugboats to pull the ship from the Gulf of Mexico to its port in Alabama.

Reportedly, Carnival is inspecting all of its ships to try to prevent issues like these from happening during future cruises.