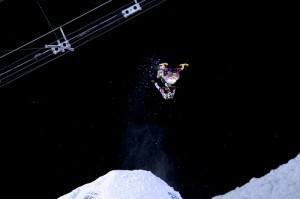 Caleb Moore, a snowmobiler from Texas, died yesterday at age 25 after sustaining injuries a week ago at the Winter X Games in Aspen, Colo. Moore was involved in a crash through which his snowmobile flipped on top of him.

Moore was performing a back-flip at the competition that came up short and caused his snowmobile to flip multiple times down a slope and caused Moore to fly over the handlebars. The machine fell on top of him, and he came to a stop at the bottom of the slope. The snowmobile weighed around 450 pounds, according to ABC.

Moore was able to walk off the course with help and was taken to Aspen Valley Hospital with a concussion, where doctors discovered bleeding around his heart. He was rushed to St. Mary’s Hospital in Grand Junction, Colo. where complications in his heart and brain were discovered.

This is the first death as a result of a competitor’s injuries at the X Games in the 18 years of its existence. ESPN produces the X Games and released a statement yesterday saying the network would conduct a review of the freestyle snowmobiling event and make any necessary changes for safety.

Caleb’s little brother Colten, 23, suffered a separated pelvis after crashing on the same slope about 30 minutes after his brother. The brothers have multiple medals from their participation in past X Games.

In a statement, the Moore family said, “[Caleb] will be truly missed and never forgotten. The family wishes to express their deep gratitude for all the prayers and support they have received from all the fans, friends and family around the world that Caleb has inspired.”