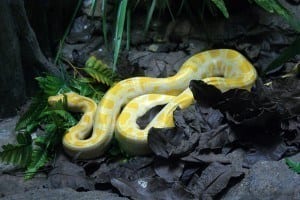 Burmese pythons are slowly overrunning the Everglades, dinning on everything from birds and raccoons to full-grown deer, reports the Chicago Tribune.

The Burmese pythons are becoming such an epidemic in South Florida that President Obama’s administration stepped in and put an import ban on Burmese pythons this January, along with impeding importation and interstate commerce of yellow anacondas and northern and southern pythons.

“While we are pleased that four extremely harmful constrictor species will no longer be allowed into this country, stated spokesman for the National Environmental Coalition on Invasive Species, Peter Jenkins, “we are disappointed that five of the proposed snakes were not included in the rule.”

The snakes in references that will still be allowed are boa constrictors, reticulated pythons, DeSchauensee’s anacondas, green anacondas and Beni anacondas.

A majority of the banned snakes were once pets and have either escaped or have been released into the wild.