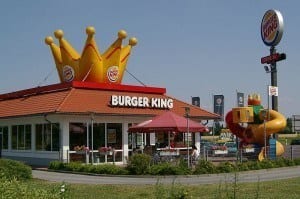 Burger King’s new menu is strikingly similar to McDonald’s, but the company is confident that their new items stack up to their competitors’.

Some of the similarities between Burger King’s new menu and their rival include specialty salads, snack wraps, premium coffee drinks and fruit smoothies. The fast food company has been struggling for a while now, and after Wendy’s bumped BK out of the nation’s No. 2 burger chain, it finally decided to vamp its menu. “Consumers wanted more choices,” said Steve Wiborg, president of Burger King’s North America operations. “Not just healthy choices, but choices they could get at the competition.”

Burger King has been subtly altering its food over the past year by making small changes, such as making the French fries thicker so they’ll stay hot longer. Burgers now come with one slice of cheese instead of two, to promote even melting, and naturally-smoked bacon is now cooked at each restaurant, whereas Burger King had previously used a pre-cooked variety with a smoked flavor sprayed on.

The Burger King uniforms, wrappers, cups and bags have all also been updated. The company is advertising its new changes with its biggest marketing campaign ever with TV ads featuring celebrities such as soccer player David Beckham, comedian Jay Leno, actress Salma Hayek and singer Mary J. Blige.

The new look and menu are a late attempt to rescue Burger King, will it be enough?