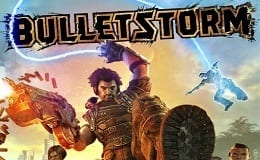 Epic & People Can Fly’s “Bulletstorm” (PC, Xbox 360, Sony PS3) is the deliciously demented video game equivalent of what could happen if the “Gears of War” developers teamed up with a Tourette’s-addled Joss Whedon after he’d bought back the rights to “Firefly.” Whedon would arrive devoid of a moral compass and armed with the filthiest edition of Mad Libs in existence, and the “Gears of War” team would be packing such an ingenious and sadistic collection of weapons that pulling off just a head shot would leave you feeling utterly disgraced.

Ask anyone pulling a paycheck from the game industry, and they’ll tell you developing a brand new FPS (First Person Shooter) in a landscape dominated by proven cash cows like “Halo” and “Call of Duty” can be career suicide. Symbolic of its crass narrative and aggressive gameplay, “Bulletstorm” even had the audacity to mock “Call of Duty,” spoof Halo’s ad campaign, revel in the Fox News controversy it inspired, and even had the stones to release alongside Sony’s behemoth “Killzone 3.” Yet when stacked against the competition on a scale of imagination, the aforementioned titles have the creativity of a weathered doormat. To put it another way, Bulletstorm doesn’t take itself so seriously. As a result, the game is a triumphant return to the days when shooters were actually Fun (yes, with a capital F!)

The surprisingly solid story follows space pirate Grayson Hunt, an ex-member of assassination squad Dead Echo, in his misadventures chasing down both retaliation and redemption. When one of his many revenge plots heads south, his ship crash lands on Stygia, an alien planet resembling a Sandals resort if Sandals was populated by man-eating plants, cannibalistic mutants and 10-story-tall, laser-gazing robotic dinosaurs named Waggleton P. Tallywicker. The plot is deeper than most shooters, and the expletive-laden narrative propelling it forward is hilarious, cringe-worthy and practically non-quotable within these pages. Some will understandably be repulsed by the frequent racial slurs and random mash ups of phallic references and potty jokes, but the developers have thoughtfully allowed gamers sensitive to vulgar language the option to turn it off.

Though the protagonist is Grayson (gruffly acted by Steve Blum, who frequently voices Wolverine), the notable co-star is the planet Stygia itself. In stark contrast to the typically drab palette of other shooters, Stygia is vibrantly colored and is the perfect canvas for awe-inspiring set pieces. In fact, this entire game is a sprawling set piece. Whether you’re escaping from a sky-high grinder wheel as it blazes a path of destruction, engaging in spectacular crashes with anything classified as a mode of transportation, or remote-controlling Godzilla-sized dinosaurs, Bulletstorm relentlessly delivers jaw-dropping moments. From Act 1 to Act 7 (a healthy 10 to 12 hours), there is never a monotonous moment.

The true showstopper though is the creative arsenal at your disposal, and the myriad of ways to invoke the game’s “Kill With Skill” tagline. Describing the weaponry of “Bulletstorm” as “over the top” doesn’t even scratch the surface. The Head Hunter is a sniper rifle that allows precise steering of each bullet, and its alternate fire mode lets you pierce enemy flesh, then proceed to steer the body into deadly cacti, steel spikes or explosive hot dog stands. The Bouncer is a bazooka that fires explosives, resulting in a bouncing ball of death which you can kick at will. The FlailGun, easily awarded “most sadistic,” hurls two grenades linked together by a steel chain. Bind a mutant with that rope of death, launch him into the air with your electric leash, then send any remaining adversaries some “Friendly Fire” as you detonate at will.

Most developers would be content to ship their shooter with a stunning alien paradise, highly original weaponry, pitch-perfect controls and a well-told story. In fact, most do. Where “Bulletstorm” further distinguishes itself is the inventive – if slightly lewd – Skillshot system. Sure, you can go ahead and get that boring head shot, but the game will actually punish you for being so predictable. Instead, over 150 different Skillshots invite you to rain down creative mayhem on your enemies. “First In Last Out” challenges you to get an enemy airborne (we suggest using the Screamer flare pistol), kill a different enemy and then finish off the original airborne fool before he lands. “Vertigo” is awarded for flinging someone off a high cliff, while “Drilldo” requires you to charge an oversized mining tool and impale two bad buys while executing a high speed slide.

The Skillshot system is surprisingly deep, utterly imaginative and more compulsive than the Xbox 360’s Achievement points. Enemies become much more than bullet sponges and obstacles, but rather inspire you to indeed “kill with skill.” This encourages you to mix up your gunplay, primarily because the points awarded are in turn pumped back into unlocking new weapons and upgrades, and thus new Skillshots specific to each weapon. It’s a seductive and rewarding feedback loop which we expect to see imitated for years to come.

“Bulletstorm” will arguably remain fresh for a second or even third play-through, and there’s still the challenging co-op survival mode “Anarchy” to play online which requires communication and teamwork. Sure, we can always find nit picks like occasional screen-tearing or lengthy post-death loading screens. There’s room to attack the vulgar narrative which can tip from grating to hilarious in the span of seconds. But there is no escaping the reality that “Bulletstorm” is a welcome breath of fresh air in a landscape ruled by tense, sterile and predictable shooters. With its impossibly high replay value, the single player campaign alone is worth the full price. While the mythical “perfect game” is just that, “Bulletstorm” is an outrageously fun ride. Sorry Duke Nukem, but it’s time for youto hail to the new king.