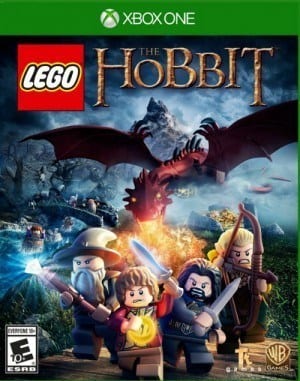 For years the LEGO series has entertained us with their own unique, cute humor that causes even the most hardcore of gamers to crack a smile. In LEGO The Hobbit that remains largely unchanged. As with each license released within the LEGO Universe, different gameplay elements are introduced to make the game feel unique, when in reality the only that changes is the narrative — and that’s taken directly from an already established plot line!

I know that sounds bad and in any other circumstance I’d expect it to come across exactly as it sounds. With The Hobbit though, it works. There’s a charm to the game overall, one that shines a light of hilarity and takes the overall tone of the movie The Hobbit and flips it on it’s head.

Suddenly it’s funny and light-hearted. Aside from the technical problems, I mean.

Technically speaking, LEGO The Hobbit is surprising and not in a good way. Playing on current-gen systems, Xbox One to be precise, seeing framerates drop in common areas where you’re simply passing through is disappointing. Even if you’re not destroying everything you can see, grabbing the game’s currency of LEGO tokens that pop out of them, the game stutters. It actually stutters and, in worst case scenarios, results in a hard freeze of the game, forcing you to quit and restart. Granted, the lock-ups occur far less frequently, but they exist.

The other issue is the fact that LEGO has taken a stance overall to allow the characters to have a legitimate dialogue. Most recently the games simply cut dialogue from the movies they’re based on, which takes a key part of what made the series a smash-hit and dulls it. The pantomiming we saw from LEGO characters in early titles has been replaced and it feels lazy. The humor is less over-the-top because dialogue doesn’t force the characters to act out the scenes we all clearly know from the movies, the narrative feels looser because it can rely on audio ripped from the movie, and the memorable scenes from the movie are far less ridiculous because both of the issues previously mentioned.

With a LEGO video game though, it’s like pizza. There are great ones, there are good ones, but there really are no bad ones. That also rings true for LEGO The Hobbit. They’ve implemented a crafting system seen in some previous games, where in addition to the normal LEGO currency you gather as you destroy every-damned-thing in a level, you also pick up random pieces of debris used for crafting. When you reach a particular crafting station, if you’re able to quickly and accurately navigate the mini-game — centered on building with LEGOs, naturally — you can score some major bonuses to your bank account.

As you progress through the game, different “hub worlds” are opened up and act like the center of a wheel, with each spoke reaching out to a story level, hidden item, side-quest, or some other nonsense that ends up being delightfully fun. Because of the scope and my familiarity with previous LEGO installments, the hubs seem to be implemented to artificially add length to the game and isn’t entirely needed. It definitely makes the game look far more expansive than it is, but it’s an unnecessary illusion.

I’m sure you’re reading this as more of a universal “What’s wrong with the LEGO Video Game Universe” than as a review of LEGO The Hobbit, but they’re both interchangeable, really. Since coming out of the gates swinging with the delightful LEGO Star Wars games, developer Traveller’s Tales has done their best to implement changes that make the games seem as if they’re evolving, something generally applauded in the game industry.

When it comes to the latest release, The Hobbit would most definitely benefit from mechanics from earlier titles. Though the game only features the first two movies of the trilogy (the third is coming as DLC around the time that the final movie hits DVD, assumedly), it’s still masterfully done. There’s an enormous stable of playable characters, you gallivant all across Middle-earth, and you get to relive The Hobbit from the point-of-view of multiple characters, each with the light-hearted mindset of the folks from LEGO and Traveller’s Tales!

Despite all the choices I’m forced to criticize, it’s still amazingly fun and addicting. If you’re looking for an escape from the normal hustle and bustle of mindless violence, the creation of pools of blood, or the blazing speed of racers, you can’t go wrong with LEGO The Hobbit.