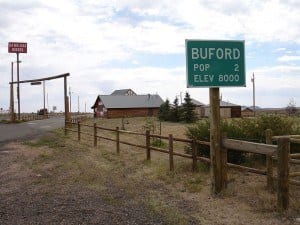 Your chance to own a piece of history

Buford, Wyoming is hitting the auction block today, and the highest bidder will walk away with the smallest town in America. The 10 acres of land comes complete with a cell phone tower, trading post, gas pump and one resident. You even get your own ZIP code with purchase.

The resident, Don Sammons, is the one selling the town. He moved there with his family in 1980 and took over the convenience store, the Buford Trading post, in 1992. His family slowly moved away over the years, and now he is selling the little town.

Buford, Wyoming may be little, but it’s had a pretty big life. It is the second oldest town in the state. Butch Cassidy robbed a store in Buford, Wyoming in the 1880s, apparently before meeting up with the Sundance Kid. President Grant stopped by one time, too.

Buford, Wyoming isn’t always desolate. Sure, there’s the brutally cold winters, but in the summer time as many as 1000 visitors pass through a day. They aren’t coming to stay, though. Buford, Wyoming is settled between Cheyenne and Laramie, so visitors are typically passing through on their way to the big city.

The auction lot includes five buildings, including a three-bedroom house, a 1900s cabin now used as a tool shed, the gas station, the trading post and a school house built in 1905.

If you want the town’s snowplow, you’ll have to pay extra. It’s going to auction separately.

Butch Cassidy may be long gone, but this is your chance to own a piece of true Americana, not to mention a piece of America.