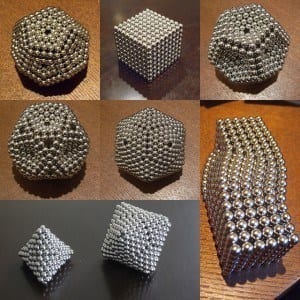 There have been two dozen incidents of children swallowing the powerful magnets, some even requiring surgery

Buckyballs, the popular magnet, pose a grave danger to children, according to the Consumer Product Safety Commission, who filed suit Wednesday to stop the company that distributes the product from doing so, a legal tactic the agency has used only once prior in the past decade.

Buckyballs, distributed by the New York-based Maxfield & Oberton, pose a grave danger to children if swallowed, alleges the CPSC, who says it filed the administrative complaint only after Maxfield & Oberton refused a voluntary recall of the BB-sized magnets.

The powerful magnets are sold in sets of 216 and are advertised as toys for adults; however, the CPSC has cited numerous incidences of children younger than 14 swallowing the magnets.

The CPSC has said it knows of more than two dozen incidences of magnet ingestion since 2009, of these, at least a dozen have involved Buckyballs and some even required surgery to remove the magnets, including the case of a 4-year-old boy who swallowed three Buckyballs believing they were chocolate candy.

When two or more of the magnets are swallowed, they can attract one another so powerfully that they can rip holes in the stomach and intestines or cause other serious injuries, including blood poisoning and death.

“Notwithstanding the labeling, warnings and efforts taken by (Maxfield & Oberton), ingestion incidents continued to rise because warnings are ineffective,” according to the CPSC, who added the magnets represent a “substantial product hazard.”

Maxfield & Oberton shot back with a statement of its own on Wednesday: “Thank you for trying to drive a $50 million New York-based consumer product company out of business.”

The company’s chief executive, Craig Zucker, called the CPSC’s legal suit “intimidation tactics” and said it is unreasonable for the agency to ban the product based on two dozen cases of misuse when there are more than half a billion magnets on the market.

“The bureaucrats see danger everywhere, and those responsible people – like our company who have vigorously promoted safety and appropriate use of our products – gets put out of business by an unfair and arbitrary process,” Zucker’s statement read.

According to CPSC spokesman Scott Wolfson, some major retailers, including Amazon, Brookstone and Urban Outfitters, have agreed to stop selling Buckyballs and similar products based on the safety risks posed to children.