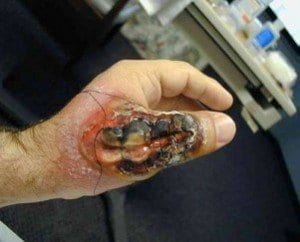 See the top ten below

The Brown Recluse Spider has been named the most dangerous spider to humans and for good reason.  Even more dangerous than the infamous Black Widow, the Brown Recluse is typically light to medium brown in color but can range to a blackish gray.

The bite of the Brown Recluse Spider is reclusive not showing up often. It can be undetected upon contact and is even weak enough not capable of puncturing clothing, but when landed can be fatal.

The number one cause of death delivered by the Brown Recluse Spider results from necrosis- the premature death of cell in living tissue. It basically looks like someone poured a bottle of acid that seeps into your skin- see photo (as if you could avoid that).

The Brown Recluse Spider lives from the Gulf Coast to the Midwest, from California to Ohio.

It has gained more attention recently after the report of Texas Christian student Nikki Perez was bitten. The Brown Recluse Spider took a piece of her ear last September and nearly blinded Perez, who was hospitalized for 5 days afterward.

The Daily Mail reported that brown recluse spiders and therefore there bites are spreading more rapidly due to global warming. Studies show that by 2020 the spider could reach as high as New York.