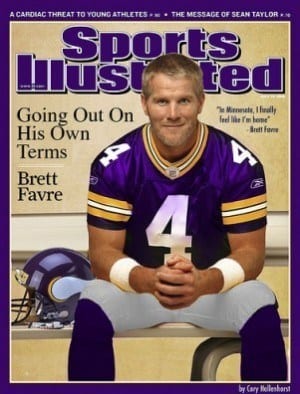 Favre’s lawyers ask the courts for the right to silence

Brett Favre’s lawsuit troubles have increased. The two massage therapists accusing the New York Jets of blacklisting them after they objected to suggestive messages Favre sent to another woman have a plaintiff team asking Favre personal questions.

As part of the 2011 lawsuit, the massage therapist’s attorneys asked the former NFL quarterback to admit or deny that he solicited women for sex trysts and sent explicit photos to a former Jets game hostess. The Jets attorneys on the Brett Favre lawsuit have put in the paperwork to the courts, asking for them to concede that he does not need to answer the question.

Those accusing Favre are asking for him to admit to several controversial actions, including whether the pictures featured on the internet of him is actually his anatomy, according to the Associated Press.

“These requests clearly have absolutely nothing to do with this lawsuit and have been included only to harass and embarrass,” attorney Sharon H. Stern wrote on the issue.

The reasoning that the defending lawyers are applying to the situation is that Favre should not have to give information about his personal life to the plaintiff because it is irrelevant.

Regardless of that viewpoint, on the therapist’s side they believe that his not wanting to answer personal questions is an attempt to keep himself away from questioning at all, according to the International Business Times.

”It’s yet another attempt by the defendants, particularly Brett Favre, to avoid having to testify under oath in this matter,” said attorney Elizabeth Eilender of the recent turn in the Brett Favre Lawsuit.