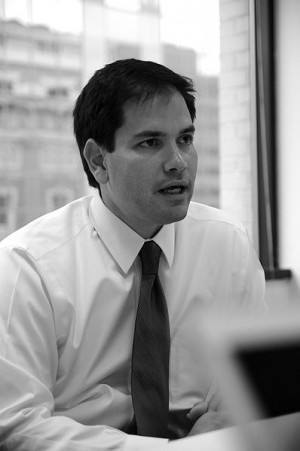 He can stand behind Romney, but is this first-term senator veep material?

Marco Rubio took the stage with Mitt Romney in an attempt to lure Latino voters back to the Republican Party. The appearance of Marco Rubio came during Mitt Romney’s shift from deep conservatism toward a more central platform.

Mitt Romney has been combating illegal immigration and vowing to veto the DREAM Act for months, an act that President Obama has stood behind throughout his presidency. The DREAM Act would allow citizenship for certain students who joined the military or attended university.

Marco Rubio, the Cuban-American conservative, has been working on an alternative to the DREAM Act. It has been speculated that his proposal would not guarantee to put those students on the fast track to citizenship, but would allow certain young people to pursue higher education or the military without fear of being deported.

Mitt Romney has said he is not yet ready to sign on the proposal Marco Rubio is writing.

“I’m taking a look at his proposal,” Mitt Romney said, “It has many features to commend it, but it’s something that we’re studying.”

It is unclear whether Marco Rubio will be chosen for the VP spot. Many have debated whether a first-term senator is qualified for the position, and Marco Rubio himself has confused speculators by first saying Mitt Romney will not pick him, to saying he would turn down an offer, to letting slip the comment, “if I do a good job as vice president.”

On State of the Union, Marco Rubio was prodded about whether or not he would accept a vice presidential offer. “I’m not going to discuss it anymore,” Marco Rubio said, “Now there’s a real process in place and I want to be respectful of the process [Romney’s] working on.”