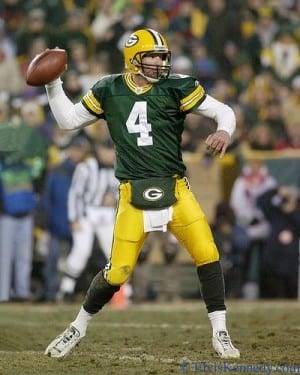 Brett Favre’s fans may not have gotten over his messy, publicized departure from the Green Bay Packers in 2008, but the Packers CEO is already planning on retiring Favre’s No. 4 jersey by 2016.

When Brett Favre announced his retirement in 2008, the Packers began immediately to prepare Aaron Rodgers as the starting quarterback. Favre then came out of retirement and asked the Packers for an unconditional release to play for another team, which Green Bay denied. He was traded to the New York Jets for the 2008 season, then after a year he went to the Pack’s division rival, the Minnesota Vikings, where he played for two more seasons.

Needless to say, the Packers and their fans haven’t been on very good terms with Favre in recent years. Despite his messy break-up with the team he helped to revive, Favre is still an NFL legend. Over his 16-year stint with the Packers he totaled 442 touchdowns and over 61,000 passing yards, breaking both Green Bay and NFL records.

In May, after jointly presenting the NFL’s Comeback of the Year Award at the NFL Honors Program with Favre, Aaron Rodgers released a statement regarding the legendary quarterback he replaced. “It’s important, I think, to make sure that he’s recognized for all the accomplishments that he’s achieved in our organization especially,” he said. He predicted both Favre’s induction into the Hall of Fame and the retirement of his jersey, both of which are becoming increasingly likely.

Packers CEO Mark Murphy responded to this hot topic in his monthly column. “He deserves to have his number retired for what he accomplished, and meant to the Packers, during his time here,” he wrote. “The timing has to be right for both Brett and the organization. Brett will be a first ballot Hall of Famer in 2016, and we would like to retire his number prior to his induction.”

Murphy hopes that the retirement of Brett Favre’s jersey will help fans get over their animosity toward him, and to help them remember the good things he did for the team.