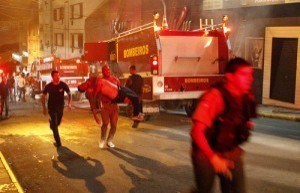 Brazil’s nightlife was in flames early Sunday, as a college concert turned tragedy resulted in the deaths of 233 young concert goers.  Brazilian officials are not sure exactly what started the fire, but there is speculation surrounding the Sputnik, a device that emitted luminescent sparks as a backdrop to the band’s show.  Sparks flying from the contraption may have set the roof on fire, and delayed reaction caused teenagers to flee towards the only exit resulting in trampling and overcrowding.  Surviving Brazilian partygoers contend that it resulted from the band aiming weak flares up at the ceiling, which unexpectedly caught fire.

The lone exit and confusion was exacerbated by bouncers demanding patrons pay their bar tabs before leaving, an unfortunate result of unawareness that led to clogging of the exit and hysteria breaking out.  Several security guards also perished in the Brazilian tragedy.  Firefighters arriving to the scene were horrified at the widespread chaos, and build-up of bodies around the exit; with the help of young men who had successfully fled the venue, they worked to hack their way into the building to free the remaining trapped victims.  The final count reveals 233 dead, including the band’s accordion player Danilo Jacques, and about 100 injured.  About 90% of the victims died of asphyxiation.

In the wake of the tragedy, answers are expected even while the first funerals are held.  Brazilian officials have arrested co-owner of the club Elissandro Spohr and two band members.  They are currently looking for a fourth person in connection with the tragedy at Brazil’s Kiss club.  Brazilian President Dilma Rousseff flew back from a summit in Santiago, Chile, and is intent on helping Brazilians cope with the loss and impact of the tragedy.