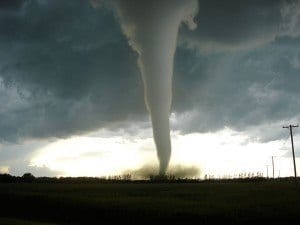 Branson one of many Midwest towns hit by winter storm

Branson, MO is in devastation after a tornado ripped through the town’s tourism district on Tuesday night. According to residents, the tornado skipped along the Missouri 76 strip causing severe damage to the tourist area of the town, known as a the Branson Strip, and a nearby trailer park where one death and at least 13 injuries were reported. News-Leader.com has a slideshow of the damage; uprooted trees, roofs torn off of buildings, houses reduced to rubble and debris littering the whole town. QCTimes reports that the Hilton in Branson had shattered windows and “some rooms had furniture sucked away by high winds.” Today, Branson, MO schools are closed because of lack of power and the difficulty of getting students and teachers to the buildings; street cleaning efforts are under way but many main streets in the town have been barricaded by debris. The local power company, Empire Electric, has reported at least 6,000 customers are without power. The company says it could day hours or days to restore power, depending on the amount of damage.

Branson, MO wasn’t the only town affected by the early season tornados, “from Tuesday night into Wednesday morning, at least 16 tornado sightings were reported from Nebraska and Kansas across southern Missouri to Illinois and Kentucky, according to the storm center, an arm of the National Weather Service,” QCTimes said. “Tornado season normally starts in March, but it isn’t unusual to see severe storms earlier in the year. Forecasters can seldom assess how serious a season will be because twisters are so unpredictable.” Desmoinesregister.com reports 11 injuries in Harveyville, Kansas and pea-sized hail in west-central Nebraska.