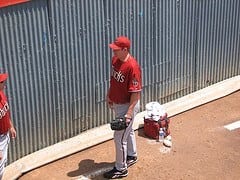 Brandon Webb, who was one of the top pitchers in baseball but suffered from chronic shoulder injuries, retired on Monday at the age of 33.

Webb won the National League Cy Young award in 2006, a award reserved for the best pitcher of the year, accumulating a 16-8 record and a 3.19 ERA. His success continued until 2008, as he went 70-34 and was selected to three all-star games in that span. He finished second in Cy Young voting during the 2007 and 2008 seasons.

Between the 2003 and 2008 seasons, Webb pitched at least 200 innings every year—a high mark for any pitcher, let alone one as young as he was at the time. The heavy workload would later come back to bite Webb.

He started the first game of the 2009 season for the Arizona Diamondbacks, but only pitched four innings as his shoulder began to bother him and he was pulled from the game. He would never make a major-league appearance again, as his injuries held him out the entire 2009 and 2010 seasons.

Webb attempted a comeback in 2011, signing with the Texas Rangers. But he never appeared in a game for the team because he re-injured his shoulder

”He has worked so hard over the past three years to come back but his shoulder just wouldn’t allow it to happen,” Montana told the Associated Press. ”He’s a first class guy with a great family that he’ll get to spend more time with now.”