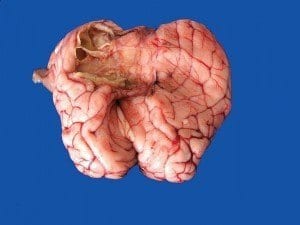 How eating uncooked pork can lead to coma, or worse – death

Partial blindness, the loss of motor functions, comas and semi-paralysis are all symptoms of brain tapeworms, according to Discover Magazine. After Theodore Nash, chief of Gastrointestinal Parasites Section at the National Institutes of Health, pulled up an MRI scan of a patient’s brain who suffered from such symptoms, he found that the white blobs were not tumors.

The blobs were brain tapeworms and can ultimately lead to the development of a disease called neurocysticercosis in the carrier. Nash estimates that the number of United States brain tapeworm carriers is between 1,500 and 2,000. Neurocysticercosis is most common in underprivileged environments, lacking a good public-health system.

Nash said, “Minimally there are 5 million cases of epilepsy from neurocysticercosis.”

The ultimate result of the parasite is a brain hernia as a brain tapeworm cyst grows and blocks the flow of cerebrospinal fluid. Death or a coma can result from these invasions.

Nash said, “Thirty or 40 years ago, these patients just died. Surgeons would go in and see this mess and couldn’t do much,” commenting on the recovery of a man who was previously in a coma due to brain tapeworms.

Treatments such as praziquantel have been tried, but have only caused more inflammation in the brain. Nash said, “Paradoxically, we produce the disease we want to treat.” Instead of experimenting treatments on humans with the disease and causing increased possibility for the ailment, Nash and his group of researchers have been testing on infected pigs in a Peru lab. Vaccinations have been done to completely defeat the population of brain tapeworms in pigs.

Nash expressed concern with the carelessness people convey regarding treatment for the disease.